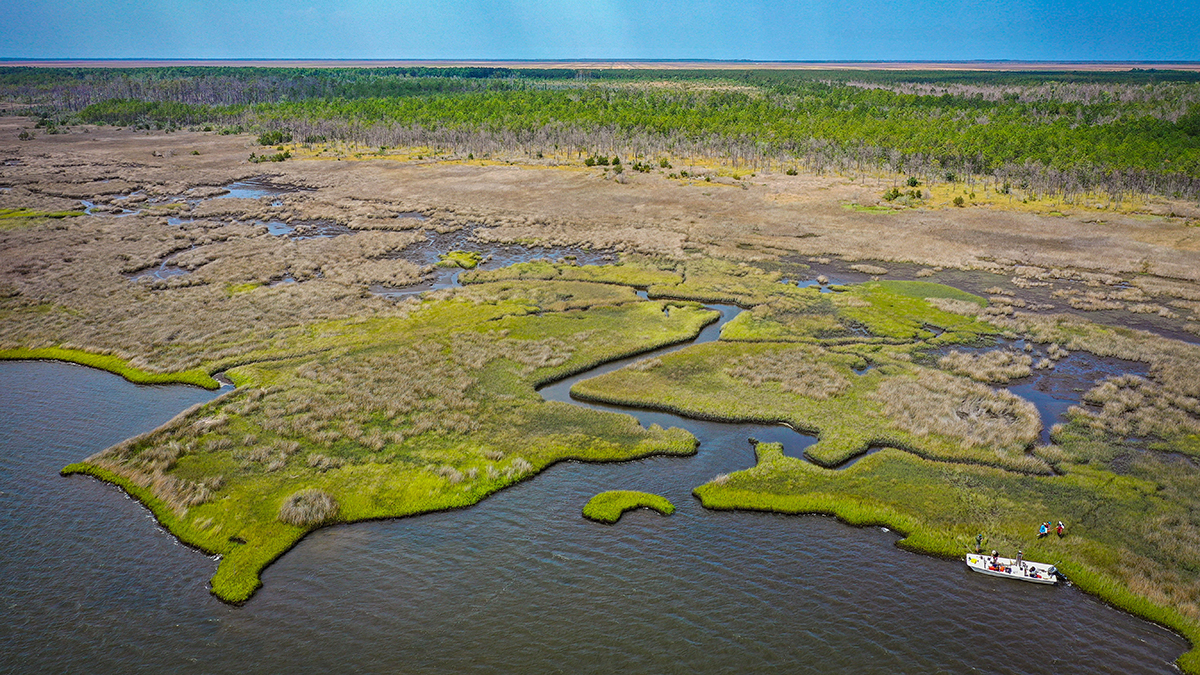 It is difficult to value salt marsh as a blue carbon habitat given the wide range of carbon accumulation rates reported in the literature.  From collecting 51 sediment cores from seven salt marshes in North Carolina we found that the 14 to 323 g C/m^2 /yr range of carbon accumulation rates results from the landward or basinward trajectory of salt marsh colonization and the intertidal space available for accretion. Rates increase with accelerating sea-level rise and are highest at young and expanding marsh edges. The highest carbon densities are near the upland, highlighting the importance of this area for building a rich stock of carbon that would be prevented by upland development.

This study was part of Carson Miller’s MS thesis at UNC.  She published two papers from work that took us about three years to complete.

Working with John Anderson for 30 years 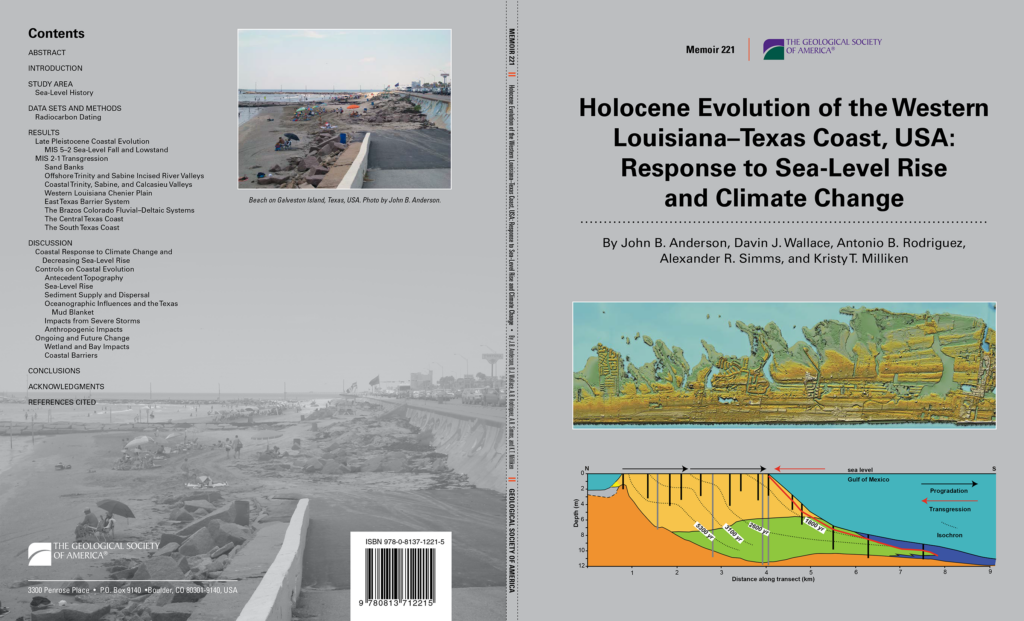 When I first met John Anderson in 1994, I was a senior at Hamilton College traveling to Antarctica to participate in an NSF research project. John was the PI on the project from Rice University and I had no idea what I was doing or where I was going.  He was in charge of the entire month-long research expedition in the Ross Sea, but he still took the time to make me feel like I had an important role to play. This is when I learned that good research is good teamwork. By the end of that trip, I knew I wanted to work with John, but of course I had no idea I would still be working with him almost 30 years later. My foundational experience with John Anderson was not unique and a couple of years ago he brought me and a bunch of his other former students (Davin, Alex, and Kristy) together to help him prepare the GSA Memoir, shown above.  It’s open access, so click on the link and grab a copy if you want to learn about the coastal areas of the Northern Gulf of Mexico.

Elevations where oyster reefs grow best increase as they age 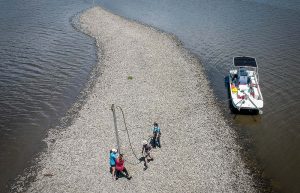 Intertidal oyster reefs are thought to grow best when they are out of the water 20-40% of the time, but as reefs age, they tend to grow most rapidly when they are exposed about 50-60% of the time.  Molly Bost recently published her first first-authored paper that presents those data, entitled “Natural intertidal oyster reef growth across two landscape settings and tidal ranges“.  We mapped oyster reef growth over a three-year period, cored reefs, and radiocarbon dated the first oyster to colonize the sandflat.  The radiocarbon date of that initial oyster represents the age of the reef. The oldest reef we sampled was 1395 years old! 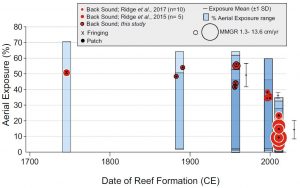 The blue bars on this graph are showing the range of exposures encompassed by each reef we looked at in Back Sound, NC.  The tops of the older reefs are high and out of the water up to 70% of the time.  The red circles represent  the aerial exposure where the reefs grow at their highest rate (cm/y) and that also increases as the reef ages.  We continue to examine oyster reef growth with the aim of defining conditions where they grow best.  This information will be used to help optimize the design of restoration projects.

Deposition of a washover fan can take some time

Posted on December 8, 2020 by Antonio Rodriguez I used to think that washover fans were all event deposits.  A major storm, such as a hurricane, impacts a barrier island, causes overwash, transports sand across the island, and deposits a washover fan.  After the storm passes, vegetation colonizes the washover, traps wind-blown sand, and builds island elevation and resistance to further overwash.  While that general model is certainly applicable to many washover fans, others take time to form.  We recently published a paper in Scientific Reports “Long-term washover fan accretion on a transgressive barrier island challenges the assumption that paleotempestites represent individual tropical cyclones” that tracks washover deposition over a 3-year period.  The study shows that washover deposits can accrete landward over multi-year time scales in the absence of large storms.  Monitoring began in 2011 and above is a recent image of the site taken in 2020 (false color).  Overwash is still an active process nearly 10 years after washover deposition initiated.  Currently, sand is being deposited in the intracoastal waterway.

Welcome Morehead City Field Site students.  We just finished the first week and so far so good.  Sunday Aug. 9 was move in day to NC State’s Coastal Quarters and we kicked the semester off with take out from Dank Burrito, eating socially distanced in the apartment parking lot.  Monday was orientation, Covid testing (my negative result was returned in 7 days??), introductions, and a tour of IMS.  First day of classes was on Tuesday.  Wednesday was a long Capstone Project day, taught by Dr. Nathan Hall and me.  We started off by touring the study site, the North River Wetlands Preserve, with the NC Coastal Federation.  The photo above is the class on a constructed hill.  It was a 7-hour day. During the final 30 minutes, when we were organizing into research sub groups, Nathan and I had to turn organization over to Molly Bost, the graduate student consultant, because our brains were fried.  Thursday was more class and a seminar by Dr. Richard Batiuk, US EPA.  Friday, the class worked on their independent research projects.  Today (Saturday), the Field Site students all had a picnic lunch and visited the Core Sound Waterfowl Museum with their Residence Advisor Jeff Plumlee.  Tomorrow afternoon is a group BBQ with Jeff as head chef.  We will likely pick up the pace over the next couple of weeks.

The Ups and Downs of Publishing It’s common for a manuscript to need revisions before it can be accepted for publication in a journal, but every once in a while, I have trouble getting a paper accepted.  It floats from one journal to the next and I am forced to deal with rejection after rejection with no chance to defend myself.  On June 26, 2020, the paper “Coastal sedimentation across North America doubled in the 20th century despite river dams” was published in Nature Communications.  The study was conducted as part of a seminar class at UNC Chapel Hill, Department of Marine Sciences led by Brent McKee and me.  All seminar participants are authors.  We wrote the manuscript during the summer of 2018 and had no idea we were getting on a roller coaster.  The figure, above, shows the three journals that previously rejected our work with some excerpts from the reviewer comments (there were many to choose from).  Nature Communications and those final reviewers were kind and patient, allowing us to respond to criticisms and revise the manuscript three times before it was accepted.  Those final reviews and our responses are available for download from a link in the manuscript (and here).

The figure above should by no means be interpreted as an expression of retribution, rather, it is meant to show empathy with others on the publishing roller coaster.  Our final work is not perfect, but it is much improved over that first submission.  Molly Bost and Carson Miller are both in PhD programs- currently working on new manuscripts for publication.  Anna Atencio works at Geodynamics in Morehead City, NC.

Since the middle of March, this is what my new normal looked like.  Working out of the back-yard shed and meeting over zoom.  We had remote lab meetings every day and finished some papers, reviews, and reports taking advantage of the extra time provided by cancelled field work and travel.  IMS is open again at a reduced level.  We wear masks in common areas, are still isolated from one another, and have begun to collect lab data again.  A slow start to summer field work.

Posted on September 15, 2019 by Antonio Rodriguez

Last week Hurricane Dorian impacted North Carolina.  In collaboration with the MARS Lab at Duke University, including Justin Ridge, we examined how the storm affected the morphology of Bird Shoal.  Before the storm came by, we deployed a camera trap and imaged the island with an eBee drone.  Above is an example of what it was like on the island during the Hurricane.  The worst of the storm hit during the night and could not be recorded.  Bird Shoal provides the town of Beaufort protection from storm waves.

Posted on August 9, 2019 by Antonio Rodriguez I’ve been working with Molly Bost to compare oyster reef growth and composition among tidal and landscape settings.  Our data set is composed of 12 natural reefs and this week we sampled the first oyster to colonize each reef to learn how old they are.  That oyster is identified by taking a core through the living reef and sifting through shells at the base of the reef to find an intact oyster (both valves).  We send a piece of that shell to NOSAMS for radiocarbon dating.  The oldest living reef we have sampled so far is about 900 years and the thickness of that reef was 1.15 m.  We have other reefs in our study that are twice as thick.  Earlier this week I read in EOS that a 2,674-year old North Carolina Bald Cypress Tree was discovered in the Black River.  Perhaps some of our oyster reefs are older than that nearby Cypress Tree?

That first oyster to grow in the area, sampled at the base of the reef, was a true visionary.  It probably never expected a reef like the one shown below would form on top of it. It belongs in a museum, but will be converted into carbon dioxide instead. It just keeps giving. Posted on October 12, 2018 by Antonio Rodriguez

This post is to help the IE 2018 class prepare for their first exam.  It’s been a tough semester filled with large storms, evacuations, and modifications.  I thought this information would be helpful because when classes are on a field trip experiencing the beauty of the NC coast and the natural environment, it can be difficult to remember the lessons learned and the context of the observations made.  We visited two saltmarsh sites at Cheeseman Inlet, an ephemeral flood-tidal delta that formed about 200 years ago in Bogue Sound.  Watch the movie and look at the cores from both sites to help you remember the marshes we observed and what that means in terms of sea-level rise and changing environments through time.